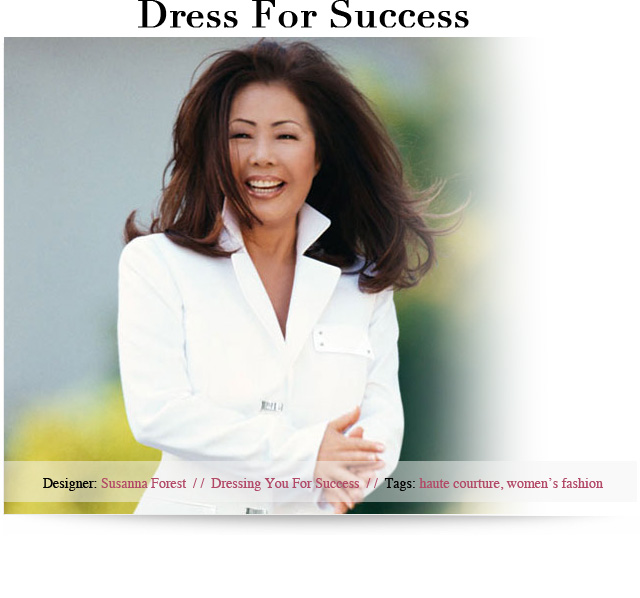 Royal blue elegant cocktail dress. Summer is here and this beautifully tailored blue cocktail dress will take from a business luncheon to a summer weekend getaway.

Dress for success and impress your audience.  Hillary Clinton’s Designer, Susanna Beverly Hills does it again.  Meeting with some of the most powerful women in business, Hillary had to look elegant, but still empowered at International Council on Women’s Business Leadership Meeting. November 27, 2012 Susanna Beverly Hills is Hillary Clinton’s designer, and here, Hillary is […]

This designer ladies honey jacket and skirt suit is the perfect business suit for women.  Custom made for the business woman on the go this spring. Match it with a honey skirt or honey pants for a sophisticated ladies pant suit look.  Imagine wearing this beautiful jacket & suit at a company business meeting,  dashing off for midday […]

Feel empowered and elegant at the same time…Dress for Success in this elegant, purple pantsuit, the perfect business women attire for the career woman.  Beautiful in lavender and light as air, this three-button silk dupioni custom made jacket is detailed with pleats at the waist and extended cuffs. Worn here over our picture-perfect pants. Please […]

Judith Sheindlin – a.k.a. TV’s “Judge Judy” – talks to the “CBS This Morning” co-hosts about her latest book, “What Would Judy Say? A Grown-Up Guide to Living Together with Benefits.”  During this episode, Judge Judy was wearing a elegant pink pantsuit designed by Susanna Beverly Hills.  Judge Judy’s designer, Susanna Beverly Hills has […]

I Dream of Jeannie Star, Barbara Eden, seeing here wearing a vibrant blue silk pantsuit designed by Susanna Beverly Hills to greet a cluster of people gathered for her photo session and then perches on the edge of a sofa bench, ready to take direction. From: https://www.435southmag.com/November-2012/Barbara-Edens-Life-Outside-the-Bottle/

The asymmetric neckline with cut-out defines this beautifully shaped dress in luxurious purple silk dupioni. This must-have custom cocktail dress for the season. Perfect for luncheons, after-five cocktails, or any black tie events.

Superb tailoring defines the fitted silhouette of this three-button custom made white jacket with beautiful stand-up collar. In paperweight herringbone twill fabric along with flower buttons and worn over a slim black skirt. Perfect day or night dress for the business woman on the go.