Hillary Clinton wears Susanna Beverly Hills to a joint interview with President Obama on ’60 Minutes’ The White House says President Barack Obama and Secretary of State Hillary Rodham Clinton gave their first joint interview to the television news show “60 Minutes,” in January 2013. Clinton is being mentioned as a possible presidential candidate for 2016. Obama and Clinton competed for the Democratic nomination for president in 2008, and their relationship has been watched closely ever since. From the article: https://thegrio.com/2013/01/25/president-obama-hillary-clinton-to-give-joint-interview-on-60-minutes/ 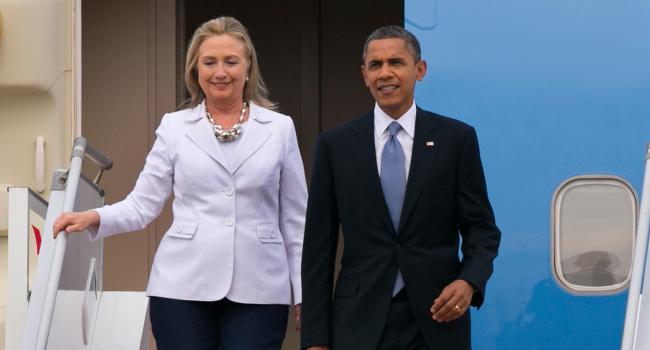 President Barack Obama and Secretary of State Hilary Clinton arrive at Yangon International airport during his historical first visit to the country on November 19, 2012 in Yangon, Myanmar. Obama is the first US President to visit Myanmar while on a four-day tour of Southeast Asia that also includes Thailand and Cambodia. (Photo by Paula Bronstein/Getty Images)