“We meet on the day after the loss of a giant among us, someone who by the power of his example demonstrated unequivocally how each of us can choose how we will respond to those injustices and grievances, those sorrows and tragedies that afflict all of human kind. Nelson Mandela will be remembered for many things, he will be certainly remembered for the way he led, his dignity, his extraordinary understanding  not just how to bring democracy and freedom to his beloved South Africa but how important it was that he first brought freedom to himself.”

Clinton adds, “I was always struck by the extraordinary depth of his self-knowledge of his awareness about how hard it is to live a life of integrity, of service, but to combine within oneself the contradictions that he lived with, a lawyer and a freedom fighter, a prisoner and a leader, a man of anger and forgiveness.” from: https://www.sabc.co.za/news/a/d721fa00421864bebde1bd1c2eddf908/Night-vigil-held-in-New-York-for-Madiba-20130712 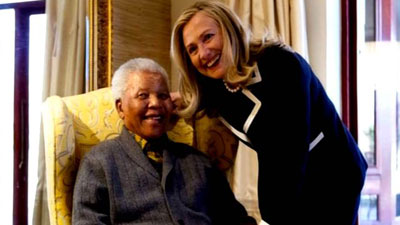